Home Some Facts The Science Other Issues Resources About News 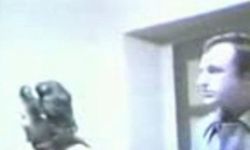 14 January 1985: Vicka (on the left) goes back into the "apparitions chapel" with Ivica Vego to try to justify what has happened

We see the Virgin, but we don’t see anything else or sense anything else.
[Janko Bubalo, A Thousand Encounters With the Blesssed Virgin Mary. The Seer Vicka Speaks of Her Experiences, Friends of Medjugorje, Chicago, 1987, p. 47]

When the Virgin appears, I no longer see nor hear anything except her.
[Ibid., p. 167]

Dr Joyeux, chosen and called up by father Laurentin, having completed his examinations on 29 December 1984, stated that in the seers “visual perception of the exterior world disappears” [cf. R. Laurentin, H. Joyeux, Scientific and Medical Studies on the Apparitions at Medjugorje, Veritas, Dublin, 1987, p. 8].
Actually, this has not been scientifically proven but relies on the simple statement of Marija and Ivanka of 7 October 1984:

Screening test for Ivanka and Marija, which consisted in placing a sheet of opaque cardboard before their eyes during the ecstasy [...] After the ecstasy they said that their vision of Our Lady was not impaired and that they did not see the screen in front of them.
[Laurentin, Joyeux, Scientific and Medical Studies on the Apparitions at Medjugorje, pp. 64-65]

That day Jean-Louis Martin is present at the apparition.
For nine months, Jean-Louis, a young Frenchman driven by a strong desire for spirituality, had left a good job in France and moved permanently to Medjugorje, after reading a book written by a Franciscan of the place, Svetozar Kraljević, that convinced him of the veracity of the apparitions.
However, frequenting daily the visionaries and the Franciscans of Medjugorje, he begun to have serious doubts that prompted him to execute an innocent (but effective) "test" on Vicka.

On 14 January 1985 the young visionaries begin to pray standing and kneel, very quickly, only when the “Gospa” arrives.

Jean-Louis draws near Vicka and suddenly brings his index and middle fingers close to her eyes, to check whether she reacts.
The scene is shot by the Canadian parapsychologist Louis Bélanger, then professor at the University of Montréal's Faculty of Theology.

Let us watch two versions of the film, both commented on by Bélanger (who has personally authorized me to publish the videos that follow).

The first has been broadcasted by the British ITV in 1995 and the second by Canadian television Canal D in 1996.

The reaction of Vicka, as everyone can see, has been evident.

And now let us consider the subsequent events, that have been documented by the two films.

In video 2, we can see that at the end of the apparition, as usual, the visionaries get up and go away. The atmosphere is tense. The priest who, looking very serious, gets near Jean-Louis is father Slavko Barbarić.

A few minutes go by and then there is a dramatic moment: the door opens and Vicka and Ivica Vego come in [cf. Monique de Gramont, La Dame de Medjugorje, in "Châtelaine", June 1985, and Frère Michel de la Sainte Trinité, Medjugorje en toute vérité, CRC, Saint-Parres-lès-Vaudes, 1991, pp. 389-390].
Ivica Vego is one of the two Franciscans who had been expelled and suspended a divinis, and who have been encouraged, according to Vicka herself, by the "apparition" to resist and disobey their bishop (see the website of the diocese of Mostar: The Attacks of the Medjugorje "Apparition" Against the Diocesan Bishop Pavao Žanić).

The scene appears in both video 1 and video 2.

At this point Vicka, to justify herself, says that during a previous apparition she had had the impression that the Child Jesus was falling from the arms of the Madonna and that this time there had been a similar situation.

First of all, let us read what father René Laurentin, the "official" historian and the biggest apologist for Medjugorje, has reported:

Ivica, a young Franciscan, was charged to ask Vicka about the fact. He had to provide an explanation (in German), requested by Bellanger (sic), a Canadian parapsychologist who has studied the apparitions.
Harassed with questions, Vicka explained that during this apparition she had a moment of emotion, because the Virgin held the Infant Jesus in her arms and she was afraid that he was falling.
[René Laurentin, Dernières nouvelles de Medjugorje, No 3, O.E.I.L., Paris, 1985, p. 32]

And now let us watch the video recording of the moment when Vicka provides the above mentioned "justification", with the original audio (and the Italian subtitles). One can clearly hear also the voice of Ivica Vego, who translates in German the words of Vicka.
The video is taken from the TV show L'Arena, broadcasted on the Rai Uno channel on March 28, 2010. I personally appeared on the show and brought the video, courtesy of Louis Bélanger.

And here is an accurate translation of the words of Vicka:

So, Ivica, I was on my knees here. I saw him (Jean-Louis) only when I entered. The girl (being with Jean-Louis) was there and he was there. Wait! He was there. The girl here. I was on my knees here. And I was praying. Afterwards I saw nothing, neither him nor Pervan, nobody. I have not seen anything.
Once, when the Madonna was narrating her life to me, when the Virgin showed me the Child Jesus in her arms, he bended so, while she was holding Jesus, I thought he would slip.
But I did not see anyone here. Only, she has showed me the little baby. Yes, it is so, I was only afraid that the child was slipping. It was so, she kept her hand so. He was there, as if I was going to take him.

Vicka, besides, later will send this answer to Father Laurentin, the official historian:

I do not have anything to say and, for my part, I would not have said anything, because I have not seen what Jean-Louis did during the ecstasy. I did not see his fist and then I had nothing to say. But I have been questioned so much about this apparition that I have recounted this particular: The Infant Jesus seemed not to be safely held in the arms of his mother. I know that nothing can happen to Jesus in his glory. But I had the feeling that he was falling.
[Laurentin, Dernières nouvelles de Medjugorje, No 3, p. 32]