Home Contradictions Facts The Science Other Issues Resources About News

Who Is the Medjugorje Madonna Promoting? [Part 2]

Go to the page Who Is the Medjugorje Madonna Promoting? [Part 1]

The founder and owner of the community, Terry Colafrancesco, published in the mid-nineties, under his usual pseudonym of A Friend of Medjugorje, the book How to Change Your Husband [Caritas, Sterrett (AL), 1996], printed by the community itself and now also downloadable from its official website.


Reading the book one is astonished by the male chauvinism, sometimes grotesque, that characterizes it: for example, he writes that the devil, in order to hide to people the potentially destructive nature of women, got persons to quit the right habit of giving female names to hurricanes that each year lash the shores of the Atlantic.
Actually, this isn’t simply absurd male chauvinism, but rather adhesion to well-known religious ideologies.

Among the morals most often cited in the book are those of Elizabeth Rice Handford, wife of Baptist pastor Walt Handford, and authoress of the book Me? Obey Him? The Obedient Wife and God's Way Of Happiness and Blessing In the Home.
Therefore, not surprisingly, the doctrines set out in the book printed by the Caritas community (based on an extremist interpretation of the Bible) are typical of Protestant fundamentalism. And i t is worth noting that these are central doctrines of the community at issue.

In the following quote from the book at issue, the reason is explained why most of the Marija’s apparitions, when the seer is a guest of the community, take place in the bedroom of the owners (more precisely, Our Lady allegedly appears standing on the Colafrancescos’ bed, on which, for the occasion, several votive objects are placed):

Roots of the family are to spring forth from it. The most sacred place in the home is the bed of the husband and the wife [....]
In 1988, when Marija first came to America [...] in Medjugorje the visionaries knelt before a crucifix hundreds of times to receive Our Lady. [....] When the apparition room was moved, Fr. Slavko gave this crucifix to the friend whom Marija later would be staying with in America [Colafrancesco here is talking about himself in third person]. [....]
When Marija first arrived [...] [she] went into the bedroom, saw the bed and the crucifix over it, and with a strong clear discernment decisively said this is where the apparitions would take place [....] The first apparition took place over the bed. It was clear that it was what Our Lady wanted. From over this bed, this rooted stump, a whole mission sprang forth, a whole community.
[A Friend of Medjugorje (Terry Colafrancesco), How To Change Your Husband, Caritas, Starrett (AL), 1996, pp. 115 and 117-119]

Let's see what the principles are on which this community is based, citing various passages of the book:

In truth, the subject of submission [of wives] has been largely ignored by a large number of priests, counselors, directors, and others for quite some time. [....]
In any topic of conversation when you hear discussed, Wives submit to your husbands, the response is Yes, but husbands love your wives. This, in turn, leads to a discussion of only this aspect – love your wife – and it usually dominates the conversation, homily, text, etc. [...] There exists a clear imbalance in the attention given this subject; therefore, what is rarely mentioned will be given the primary attention in what follows. It is the most important spiritual direction Caritas of Birmingham has ever printed, because if it is followed, it will work, since it is based on solid Scripture, backed with Our Lady’s messages and the lives of the saints [bold type and underlines are in the original].
[Ibid., pp. 18-19]

Narrow-mindedness has mislead many, even Christian women, to believe that subjection to male authority leads to the degradation of women, turning them into second-class citizens, when, in fact, it is a lie.
[Ibid., p. 22]

A husband is under the direction of God the Father in “aspects” as to the decisions of what is best for his wife and family. His wife is under his direction.
[Ibid., p. 149]

Fatherhood and its right to rule cannot be compromised. The father’s right is so supreme that even the Pope does not have the right to usurp it (except in sin), nor will Christ Himself contradict him. [….]
A wife may think: “But I’m right about a certain issue!” It is very important to note that obedience is more important than being right [bold type is in the original].
[Ibid., p. 167]

Ok, if obedience is more important than being right, what if a husband wants to take their life’s savings to invest and the wife’s wisdom tells her it will be a mistake and she knows she is right? She must be obedient, even if because of his decision they lose their home, cars, everything. The family order will still be intact. That is far better fruit than rebellion against the husband bringing rebellion into the family, thereby killing it in the war that could result. What good will the house be, the cars, etc.?
[Ibid., p. 171]

Apart from the obvious absurdity, that doesn’t need to be highlighted, this kind of "teaching" is especially dangerous in a country like the U.S., where, as everyone knows, there are many para-religious communities that seek to persuade their followers to give them all their possessions.

In the second part of the book (entitled "Unmasking Satan’s Plans”), is reported the quotation of an interview released by the Baptist pastor H. B. London, who states:

Where we are going is to be a family-driven society in many ways, where the influence on the children is going to be almost completely a female influence.
[Ibid., p. 252]

This process of feminization exists and is a clear departure from the Scriptures.
[Ibid., p. 253]

And then he concludes as follows:

The naming of hurricanes using women’s names solely, which had been done for decades, stopped. The reason put forth was a “fairness” which equates that everything must be equal between men and women, even though God did not make it that way, either physically or emotionally. Yet in this case the truth is very simple. Statements such as 'Hell hath no fury like a woman scorned', even though they speak truth, are labeled as 'no-nos'.
Satan wants to hide these reminders and he tricks us in many ways. He plays on our sensitivity for fairness, our language, our sayings, our directions, which easily causes us to place ourselves in his hands. We do not reflect on why we are changing the gender name of hurricanes. Why were they named only after women to start with? Was it because there were elements of truth that all of society knew and accepted of how a rebellious woman’s disposition compared to a hurricane? Our changing it insinuates that those who began calling hurricanes women’s names were wrong, that there was no true reason for naming hurricanes as such. The purpose in originally naming hurricanes was [underline is in the original] because of the truth that what a rebellious woman is like is comparable to a hurricane.
[Ibid., pp. 278-279]

This is the community that has been endorsed, publicised and benefited from Marija Pavlović's alleged apparitions over 30 years - indirectly generating millions of dollars from the contributions of the US devotees.

Thanks to Diane Korzeniewski, Michigan (United States), for sending me the photo at the beginning of this page: it is a billboard of the Caritas community, with details of the website and of the phone number.
What is strange is that the community, although takes advantage from these advertisings, gets to pay them to the devotees of Our Lady of Medjugorje all over the United States. Caritas of Birmingham, in fact, in the page of its website dedicated to this campaign (which is taking place "since the early 90's") claims that "this will bring many new souls to Our Lady" and "by taking an active role for only $100.00 (plus $25 shipping of the billboard) per billboard, your impact in your home state can be very effective on souls."

The faithful receive a billboard 10' X 22' and, applying to advertising companies affiliated with the community, can post it for at least a month.

Here, an article from the newspaper Denver Post of October 24, 2010 (signed by Electa Draper), which spaks of "Nine Catholic mothers in their late 20s to mid-40s, who meet monthly to pray the rosary, helped raise $1,000 to put up two billboards in the Denver area."

Caritas of Birmingham has also a representative office at Medjugorje. A reader sent me these photos that he himself took in 2005 near the office at issue. 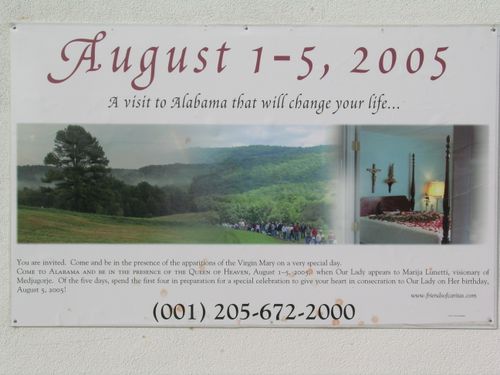 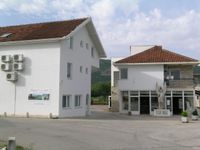 Translation: "August 1-5, 2005 A visit to Alabama that will change your life... You are invited. Come and be in the presence of the apparitions of the Virgin Mary on a very special day. COME TO ALABAMA AND BE IN THE PRESENCE OF THE QUEEN OF HEAVEN [capitalized in the original], August 1-5 2005, when Our Lady appears to Marija Lunetti, visionary of Medjugorje. Of the five days, spend the first four in preparation for a special celebration to give your heart in consecration to Our Lady on Her birthday, August, 5, 2005!"

Article published on 24 June 2009. Last update: 31 December 2019
Thanks to Pete for revising the English translation of some passages in the Part 1 of this article.