Home Contradictions Facts The Science Other Issues Resources About News

Praised and Excommunicated. When the Medjugorje Madonna Said: "Thank Tomislav Very Much: He Is Guiding You So Well"...

Vlašić (in profile) together with Marija, in the mid 80's

On 25 January 2008, the Congregation for the Doctrine of the Faith, with decree 144/1985, notified the sanction of interdict to Father Tomislav Vlašić due to his activities in a community he had founded in Italy. In the decree was written that father Vlašić was suspected of “heresy and schism" and charged with "diffusion of dubious doctrines, manipulation of consciences, suspicious mysticism, disobedience of legitimately given orders and imputations 'contra sextum' [against the sixth commandment]."
In 2009, the Holy See reduced this Franciscan to the lay state (official act, signed on March 10, 2009 by the General Minister of the Order of Friars Minor, Father Jose Rodriguez Carballo with reference number: 098714).
On July 15, 2020, the Congregation for the Doctrine of the Faith published a decree of excommunication against Tomislav Vlašić (see the 23 October 2020 prot. 34.20 press release of the Diocese of Brescia).

Well, the "seers" have repeatedly highlighted the favour, if not the preference, of the Gospa (Medjugorje Madonna) for Father Vlašić. 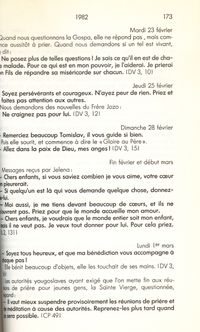 On May 28, 1983, as we have already seen (on the page When Marija Pavlović Confessed That She Had Invented Some Messages (At the Request of Father Tomislav)) the Franciscan is again chosen by Our Lady to found a new prayer group, which will be guided by him and by the"seer of second-generation" Jelena.

And the next 3 June, after Vlašić undertook the foundation of the prayer group, the “main” visionaries asked the Madonna:

- What do you expect of Fr. Tomislav? Has he begun well?
- Yes, it is good. Have him continue.
[Laurentin, Message et pédagogie de Marie a Medjugorje. Corpus chronologique des messages, p. 189]

Also Marija Pavlović will join the prayer group, since its establishment. The seer will remain for all four years in which it will be active.


Marija Pavlović on November 30, 1983 asks precisely Vlašić to write a letter to John Paul II, to draw his attention to the facts of Medjugorje (the letter, written the following 2 December, is published in full in R. Laurentin, La Vergine appare a Medjugorje? ("Does The Virgin Mary Appear In Medjugorje?"), Queriniana, Brescia, 1991, pp. 221-224).

On 5 March 1984 in the Cronicle of the Apparitions, written by the assistant pastor Vlašić himself, we can read what follows:


Vision - Tonight the four visionaries have had the vision.

[The Madonna] also told him to entrust himself to friar Tomislav Vlasic to guide him spiritually.

And here's the relevant page of the Chronicle of the Apparitions (a copy of which is kept in the Archives of the Parish of Medjugorje and of Curia of Mostar):

§ 2. The Gospa vs. the Bishop: "Satan's Plan" and the Endorsement of Vlašić

In January of 1984 the bishop, Msgr. Žanić had extended to 15 members the diocesan commission of inquiry on Medjugorje.
At the beginning of the next month of July it was clear the negative direction of the committee, as was well known the will of Bishop Žanić to remove Father Vlašić from Medjugorje.

And, very punctual, came the message of 12 July 1984 (the first of a series devoted to the supposed "plan" of Satan):

On July 29, 1984 Msgr. Žanić formalized his willingness to transfer the Franciscan, writing (to the Father Provincial of the Friars Minor) that the presence at Medjugorje of Vlašić, so influential in respect of the visionaries, was "detrimental to the negative judgement that is being prepared" (Prot 798/84 : cf. R. Laurentin Racconto e messaggio delle apparizioni di Medjugorje ("Story And Message of the Apparitions of Medjugorje"), Queriniana, Brescia, 1987, p. 169).

In September 1984 Vlašić was transferred to Vitina (less than ten miles from Medjugorje) [cf. Laurentin, Racconto e messaggio delle apparizioni di Medjugorje, p. 172], having obstinately refused to obey the order of the bishop: not to permit the "apparitions" to take place in the church any more.

The series of messages as mentioned that denounced the Satan's plan against Medjugorje followed until January 1985 [for example, 27 December 1984 and 17 January 1985, cf. Laurentin, Message et pédagogie de Marie a Medjugorje. Corpus chronologique des messages, pp. 232 and 234].
We can see here the technique used by the "New Religious Movements" when they feel themselves encircled: they implement the literal demonization of the opponent (in this case, the Bishop and the committee of inquiry).

And that Medjugorje, during those months, was surrounded is proved by the discouraged words of Father René Laurentin, "official" historian of these "apparitions", at the end of 1984.
This Mariologist said:

Towards the end of 1984 I wrote: Humanly all should end badly, in one way or another. Exaltation or despair, enlightenment or delusion, disobedience or flat resignation. It would take a miracle to escape these fatal outlets.
[R. Laurentin, La Vergine appare a Medjugorje?, Queriniana, Brescia, 1991, p. 64]

And it is interesting to know that a few years later, Žanić will publish a document in Italian, English, German and Croatian: The Truth About Medjugorje, where he writes, among other things:

Rev. T. Vlasic often put "Our Lady's" words into the mouths of the "seers", such as "Our Lady's" affirmation that Satan (in this case the bishop) is out to destroy her plan. He wrote this more clearly in a letter to friends in the Vatican. I complained about this accusation that he has called the bishop Satan, in front of Vlasic and his Provincial. He did not deny my objection but rather, he justified his words by saying that he wrote this while under the influence of extreme emotion. A person can say something while under emotion, but this cannot be written down and translated into foreign languages.
[Msgr. Pavao Žanić, The Truth About Medjugorje, Mostar, 1990, § 20]

See also The Gospa and Instigation to Insubordination, § 3 , where you can read some explicit messages in which the bishop is demonized, in January 1985.

Even after the "plan" having been reported, the Gospa’s demonstrations of favor and predilection towards Vlašić (who continued regularly going to Medjugorje) did not stop.
As just one example, on October 25, 1985, in the Corpus of messages we can find what follows:

Tomislav Vlasic, whom the Blessed Virgin had entrusted with a responsibility through Jelena, asks through the seer Marija:
- How should I do it?
- Do not worry, I will help you.
[Laurentin, Message et pédagogie de Marie a Medjugorje. Corpus chronologique des messages, p. 294]

As mentioned, even after being transferred to Vitina, Tomislav Vlašić stayed in close contact with the visionaries.
But in the spring of 1987 there was "the departure of Father Tomislav, who retreated into a monastery for an indefinite period." ["Echo of Medjugorje" (today, "Echo of Mary Queen of Peace"), No 39, April 19, 1987, p. 2].

Vlašić came back to Herzegovina on 15 November of that year.
Marija Pavlović was particularly happy:

In 1988, Marija went to Italy in order to follow Vlašić, who had founded in Parma the Kraljice Mira community. Besides, the Gospa addressed the following message to the other members of the prayer group who wished to enter the community: "I bless the free decision of each of you."
For further details and documentation you can read the page When Marija Pavlović Confessed That She Had Invented Some Messages (At the Request of Father Tomislav).
The connections of Vlašić with Medjugorje remained standing even after Marija, in July 1988, confessed to having lied by request of this Franciscan.

Here are some quotes from the Chronicle Of the Apparitions, then edited by Father Slavko Barbarić, relating to the Youth Festival, in the first week of August, 1990 and 1991.
These quotations are taken from an article published by the Curia of Mostar on its official bulletin, Službene Vjesnik [n. 2 / 2009, p. 188]:

See also the article The Former Father Tomislav: "I Evangelize the Other Planets".